Caught in the midst of a government trying to cover up its' own wrongdoing, 25-year-old (born May 1, 1997) Eddy Loper, a U.S./Canadian citizen by birth, from his father's viewpoint, has been a missing person for the last 21 years.

Eddy's father, former New Jersey Sheriff's Officer Scott Loper, has been struggling with the U.S. and Canadian governments for that length of time, demanding a legitimate reason why Canada is denying his parental rights.

According to U.S. State Department officials, the Canadians, using the dubious defense that Eddy's Canadian mother, Carolyn, was admitted into a witness protection program, are refusing to provide any information regarding Scott's son Eddy or his former wife, Carolyn.

Carolyn divorced Scott in 2002. He was served papers after the proceedings had taken place. She was then granted full custody, in a closed hearing in which 11 pages were deleted from the court records which were subsequently sealed. Scott was never informed of these proceedings, beforehand or afterwards. We have obtained court documents, through confidential sources, stating that Scott is restricted from obtaining any information regarding the closed hearing, the justification for a decision granting full custody to Carolyn, or why Eddy should never see his father again.

Scott fears his son and his ex-wife are in danger. "What did Eddy do" he asks. "Why should he have to be protected from anything?. It certainly has nothing to do with anything he did." Eddy, he says, could be home with his father, in a safe environment. "I'm not trying to take Eddy away from his mother, but if he is in danger, he deserves to be safe. If he is not, we both deserve the ability to spend some time together and have a relationship like any father and son."

Currently, there are many more questions here than answers. The fact that some of the questions exist at all is an answer in itself. Real answers can only hold the truth that will reunite Eddy and his father.

"What you have described is one of the most egregious Governmental violations of law and human liberty that I have ever heard in modern times and you can't seem to get to first base with respect to getting Justice for yourself because it's Canada!"
-- Judge Andrew Napolitano (Fox News)

IN A NUTSHELL: The search for Eddy Loper - Summary

Claims of witness protection could open a can of worms for Canadian government.

Canada's fight to protect a national symbol at any cost. Official cover-up of a growing cancer of police corruption in a proud culture.

Victim or accomplice? Only Carolyn Preyde-Loper knows the truth. Will she corroborate Scott's Story?

In A Nut Shell

With the help of the Canadian Government, Eddy Loper was abducted by his Canadian-born mother under an unusual set of circumstances. It remains to be proven whether Carolyn Preyde-Loper acted out of self-interest or under intimidation from organized corrupt police officers or the Canadian Government itself, or both.

Eddy's father, Scott Loper will not stop until he is reunited with his son. He has been fighting a long battle with U.S. and Canadian officials, most of whom just want him to go away. "I won't go away", says Scott. "Not until I find my son. I'm his father and he means the world to me."

The Canadian witness protection program, modeled after the U.S. system for protection of witnesses, was designed to safeguard informants in drug smuggling and organized crime prosecutions.

The question of why Carolyn would be involved in a witness protection program could open quite a can of worms for the Canadian government. It is apparent that the government is protecting itself - not Carolyn - and Scott Loper is working hard to open that can of worms in order to find his lost son and for the truth behind the reasons why the woman he loved suddenly turned against him. Scott now believes she may have had no choice. 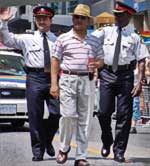 To understand the story of Scott and Carolyn Loper, the reader must be aware of the odd and almost unbelievable save-face mentality that permeates the Canadian government when official corruption threatens to expose itself to the public eye.

This fear has created an atmosphere of systemic coverup, breeding a growing cancer that undermines the very core of an otherwise proud, dignified, peace-loving country.

When it comes to law enforcement, hiding police corruption is more than an official attempt to save face. It is, in the minds of its guardians, a necessary action, taken at all costs, to protect a national symbol.

Scott and Carolyn Loper were a typically average couple. They met in 1992 while Scott, a U.S. citizen, was in Canada. They were married there in 1995, and son Eddy was born in 1997.

When Eddy was three, the family moved into a townhouse in Ajax, a Toronto, Ontario suburb. Scott's discovery, shortly thereafter, that his next-door neighbor was involved with regional police in an illegal drug ring, threw his family into a web of extortion and governmental cover-up and violation of international treaties that the U.S. State Department has continued to ignore.

The keys to the truth rest with Carolyn. What happened to her is a story only she can tell. We hope that she is safe but we have no assurance of that. One thing is certain - she can corroborate Scott's story.

What were Carolyn's motivations and intentions? Was she and is she still being terrorized by corrupt police, or did she betray the man who loved her while manipulating a situation to her own self-interests?

Complicity of the U.S. State Department 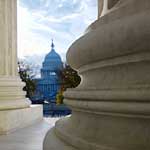 According to a State Department manual, the most important duty of that department is the protection of U.S. citizens. In the case of Scott and Eddy Loper, the State Department, through two administrations, has failed miserably.

In correspondence, department officials continue to state they take violations of international treaties (such as the Vienna and Hague Conventions) seriously, yet their actions state just the opposite.